Emmerdale Past & Present Wiki
Register
Don't have an account?
Sign In
Advertisement
in: Emmerdale characters., Current characters., Characters first seen in 1994.,
and 14 more

Zakariah Bartholomew "Zak" Dingle is a charcater in Emmerdale. He made his first appearance in the show in Episode 1914 (20th October 1994). Over the years Zak has had many dramas in his life to deal with and also thrown many fists and one time he even put his own son Cain Dingle in hospital in December 2011, which was revealed in January 2012 in the 'Who Attacked Cain' storyline. Zak married Joanie Wright in 2016 after splitting from Lisa. Zak has somewhat mellowed in recent years as he has got older, and has even become a kind of Seth Armstrong style character, a village elder. Zak is played by Steve Halliwell.

Zakariah Bartholomew Dingle was born on the 19th January 1952 in Beckindale to Jedediah and Peg Dingle. (The Liverpool place of birth is a total myth and has never been revealed in the series). In 1960 when Zak was 8 years old, Jed left the family, leaving Peg and their children Shadrach, Albert, Zak, Caleb, Ezra and Zebediah fending for themselves. Peg said Jed had died. Zak had seen blood on the floor the following morning, and no sign of his father so he always assumed his father had died, maybe killed by his mother. Zak was none the wiser as to what really happened, Jed left. Their Original Dingle Home was later vacated when they moved to a converted barn of Holdgate Farm.

In the 1970s Zak met Nellie Lynch and they married in 1973 after their first son Francis "Butch" Dingle was born. Another child, Ben Dingle followed in March 1974. But in February 1974, a month before Ben's birth, Zak had a one night stand with his brother Shadrach's wife Faith Dingle on Valentine's Day and a son Cain was born on the 30th November 1974. Zak never knew he was Cain's real father for many years and Shadrach bought his nephew up as his own, not realising the truth. Zak and Nellie had two futher children, Sam in 1977 and Tina in 1978. Zak was once the Bare Knuckle Champion of the Dales.

In January 1995, Zak appeared again when he confronted Angharad McAllister over the feud between Tina and Jessica McAllister. Zak terrorised Luke McAllister for the death of Ben Dingle. Even though Ben died of a heart defect, the Dingles still blamed the McAllisters. They thought Luke's father Dr Bernard McAllister had doctored (no pun intended) the medical notes on Ben's death to get Luke off any charges but this was not the case. Due to much terrorising from the Dingles, Bernard and Angharad left the village in February 1995. Luke stayed, so Zak and his family carried on their hate campaign against Luke. Tina even romanced Luke but jilted him at the altar. Luke died in a car crash a week later.

By mid 1995 the Dingle family dominated the show and Zak and his clan upset and annoyed the villagers, from Frank Tate to Alan Turner. In late 1995 Nellie Dingle left to tend her sick father in Ireland.

In 1997, Zak dated Lisa Clegg and they married in January 1998. Zak became friends with Lisa's ex husband Barry Clegg. In September 1999 Zak saved Ollie Reynolds from a fire. The following March, Butch died in a bus crash and Nellie returned for the funeral. Zak later discovered that his "nephew" Cain Dingle was his son as Zak had a brif fling with his brother's wife Faith Dingle. In 2001 Zak found out he had testicular cancer.

In January 2012, Zak confessed to son Cain that he was his attacker. Since then Zak has gone into a strange mood and has been drinking quite a bit and disappearing for the odd day or two without telling any of his family. In March 2012 he took grandson Samson to a hide in the woods and drunk alcohol in front of him. Sam was not happy with his father when the truth outed. In recent months Zak has deteriorated into depression and in April 2012 had a panic attack in the Woolpack. This is due to his guilt over attacking Cain and how he feels he is a failure in life. Zak was later admitted to a mental hospital and discharged himself soon after but later asked to be readmitted. Two loan sharks are after him for £8200 they lent him. Lisa and Charity have paid them a bit of the money. Zak spent some time in hospital. 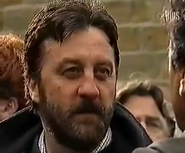 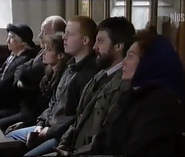 The Dingles at Joe Sugden's funeral.

Zak and co outside his early childhood home in 2002.
Community content is available under CC-BY-SA unless otherwise noted.
Advertisement