Emmerdale Past & Present Wiki
Register
Don't have an account?
Sign In
Advertisement
in: Emmerdale characters., Current characters., Characters first seen in 1994.,
and 11 more

Victoria Anne Sugden (previously Barton) is a character in Emmerdale who was born in March 1994 during the shows run. She is the youngest child of Jack Sugden and only child of her mother Sarah, nee Connolly. She and her older half brother Robert Sugden are the last remaining blood Sugden's in the village. Victoria was best friends with fellow villager Amy Wyatt until Amy left for Ireland in 2013. She wed Adam Barton in June 2015. She was originally played as a baby by Jessica Heywood (1994-1996); Hannah Midgley (1996-2006); and Isobel Hodgins (2006 onwards).

Victoria is born in March 1994 to Jack Sugden (Clive Hornby) and Sarah Connolly (Alyson Spiro). When she is only days old, her crying brings her grandmother, Annie Sugden (Sheila Mercier), out of the coma she has been in after being injured in the plane crash the previous December. Baby Victoria Anne is so named after her 2 grandmothers, Anie Sugden and Victoria Connolly. In May, Jack and Sarah marry. Weeks later, Victoria stops breathing, due to a hole in her heart and needs an operation but makes a full recovery.

her, Robert (Christopher Smith) and the Sugdens eventually adopt him. The Sugdens struggle financially so Richie Carter (Glenn Lamont) becomes their new lodger. Sarah and Richie begin an affair and she left Jack for him, moving into Pear Tree Cottage together. Jack and Sarah battle for custody of the children and Sarah wins custody of Victoria. Sarah later dies in a barn fire started by Andy for insurance reasons. Jack is in the frame for arson and murder but is cleared.

Victoria later has an imaginary friend called Walter Todd and refuses to go out unless he could come too but grows out of it, like many children. Victoria later collapses and is rushed to hospital and is diagnosed with a ruptured appendix. Times are difficult for the Sugdens but life is made easier by Jack's relationship with Woolpack landlady, Diane Blackstock (Elizabeth Estensen). When Diane had discovers she has colon cancer, Victoria supports her and told the congregation at Jack and Diane's wedding and is bridesmaid at Andy's wedding to Katie Addyman (Sammy Winward). Victoria later catches Katie and Robert in bed together and Robert threatens her into keeping quiet, only communicating via a dummy, Alfie. Jack loses patience and smashes Alfie and the truth is eventually revealed.

Victoria befriends Kayleigh Gibbs (Lily Jane Stead) at school and helps get her father, Martin Crowe (Graeme Hawley) together with Louise Appleton (Emily Symons). The girls misbehave, gatecrashing Jamie Hope's (Alex Carter) rave and starting a campaign of terror against pensioner Edna Birch (Shirley Stelfox), culminating in Edna slapping Victoria. They also tell Aaron Livesy (Danny Miller) about Carl King's (Tom Lister) one-night stand with Del Dingle (Hayley Tamaddon). Victoria (now Isabel Hodgins) returns from Annie in Spain, later than expected, prompting Jack and Diane to worry but returns safely. Victoria and Kayleigh go clubbing but Kayleigh leaves early. Victoria flirts with an older boy and he tries to force himself on her but Billy Hopwood (David Crellin) stops him and rescues her. Billy drives her home but his breaks fail, due to Kelly Windsor (Adele Silva) sabotaging them, and they crash into a lake. Victoria almost drowns, only escaping as Jack, Andy and Daz arrive. Jack blames Billy until Victoria told him that Billy had saved her life. Victoria's fear of water returns to haunt her on a canoeing trip where she freaks out and hits her instructor, Christian Schwarz and is suspended as a result.

Victoria searches for the truth about Sarah's death but no-one will discuss it. Jack is evasive but Jasmine Thomas (Jenna-Louise Coleman) shows her an article in the Hotten Courier about Sarah's death seven years earlier. She then investigates after Jack becomes more and more evasive. She tracks down Richie who tells her Jack was not responsible but she doesn't believe him and on her return to the village, she steals a can of petrol from the garage and douses the house with it, threatening to set the place alight unless the truth is told. Andy confesses but when Jack tries to clean Victoria's bloody head after a fall with water from the hot tap on a flannel, it makes the house explode. The Sugdens escape, assisted by Billy and Jonny Foster (Richard Grieve). Victoria is charged and placed in psychiatric care, which gets her bullied at school. Andy is arrested and jailed for three years but eventually freed.

When Andy begins beating his new wife, Jo (Roxanne Pallett), Victoria refuses to have anything to do with him. On Christmas Day 2008, while messing around with other local teens, Victoria falls through the ice and nearly drowns. While under the water, Victoria finds a corpse which is later identified as missing police officer Shane Doyle (Paul McEwan). Annie informs the family of Jack's death, leaving them devastated and Victoria decides to live with Annie in Spain but Daz tells her he will miss her. They begin sleeping together, despite the fact Daz is dating Scarlett Nicholls. Victoria is hurt when Daz decides to remain with Scarlett and tells him she is pregnant but it turns out to be a lie. Scarlett soon finds out the truth when Daz jealously attacks Aaron, after catching him and Victoria together.

Victoria befriends Hannah Barton (Grace Cassidy), daughter of the new tenants at Butler's Farm but Kayleigh does not like her and begins bullying Hannah. Eventually, Victoria tires of this behaviour and cuts Kayleigh out of her life. She also makes friends with Amy Wyatt (Chelsea Halfpenny) and they soon become close friends. Alex Moss (Kurtis Stacey) the new farmhand at Butler's Farm arrives and they become a couple. Alex's incessant flirting with other women drives Victoria to dump him. When she feels she has made a mistake, Victoria tries to get Alex back but is horrified to discover he is involved with Moira Barton (Natalie J. Robb). During this time Victoria buys Betty Eagleton's (Paula Tilbrook) house on the condition that she and Alan Turner (Richard Thorp) stay on as tenants and Victoria agrees. Victoria begins a relationship with Adam Barton but it breaks down when she find he is involved in illegal activities with Robbie Lawson (Jamie Shelton).

Victoria later provides Val Pollard (Charlie Hardwick) with a shoulder to cry on when she discovers that she may be HIV positive. Victoria tries to urge Val to tell her husband Eric (Chris Chittell), but it takes a few weeks to actually tell Eric. Victoria is later stunned when she discovers that Diane and Eric slept together after Val reveals their secret to the regulars of The Woolpack. Victoria, however, sticks up for Diane. She and Eric later rush to the scene when Val sustains a fall in the village and cuts her knee.

In January 2014, Victoria befriends newcomer Finn Barton (Joe Gill), who reveals that he is gay and has feelings for

David Metcalfe (Matthew Wolfenden), who owns the local shop. Victoria celebrates her 20th birthday in March, making her one of the longest continuously appearing characters on the series. Robert returns to the village in September with fiancé Chrissie, her father Lawrence, and step-son Lachlan in tow. Initially, Victoria is, like a majority of the village, bitter towards Robert, but as time passes, she warms to him again and comes to accept his return along with Andy. Victoria then restarts her relationship with Adam as he attempts to get her back by buying her a puppy, and cooking naked in the Woolpack kitchen. She spends New Year's Eve with Adam. In February 2015, Victoria attends Robert and Chrissie's wedding, but it ends in tragedy when Andy discovers Katie's deceased body at Wylie's Farm; she had been pushed on to some loose floorboards by Robert, which he did to stop her revealing his affair with Aaron (Danny Miller), who initially lost his virginity to Victoria, and left for dead. Victoria supports Andy as he attempts to commit suicide only hours after Katie's funeral. She pleads for him to see hope, along with Diane, Chrissie, and Robert. Andy later goes to stay with the Whites at Home Farm.

Victoria was raped by Lee Posner in 2019 after she rebuffed him.

In January 2020, Victoria gave birth to a son Harry Sugden, Lee's son. Oh my Victoria, if you knew about the man who once terrorised Matt Skilbeck, your father's former brother in law, back in the 1980s, you'd reconsider that name. 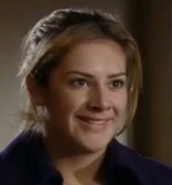 Victoria Sugden in 2012.
Community content is available under CC-BY-SA unless otherwise noted.
Advertisement