Emmerdale Past & Present Wiki
Register
Don't have an account?
Sign In
Advertisement
in: Emmerdale characters., Past characters., Characters first seen in 2004.,
and 17 more

Thomas Albert "Tom" King was a fictional character in Emmerdale from Episode 3674 (29th February 2004) to Episode 4556 (27th December 2006). During his tenure as the lord of the manor at Home Farm he acquired no end of enemies which lead to his eventual murder in December 2006, and the murderer was later revealed to be his son Carl King. He was played by actor Ken Farrington.

Thomas Albert King was born on the 11th May 1939 in Beckindale to Albert King and his wife. He grew up in the village, and knew the Verney family of Home Farm, then known as Miffield Hall, and got married to Mary McSween in the early 1960s when he was building up his business empire. Their first child, James Frederick "Jimmy" was born in March 1965 followed by Matthew in 1970, Carl in 1976 and then Max in 1979. Mary King later fell ill to termial cancer and Tom hired Carrie Nicholls as a nurse. Mary King died in February 1986 and by then Tom had become a multi millionaire. He then left Beckindale.

In 1991, Tom got Carrie Nicholls pregnant and she had a daughter Scarlett Nicholls.

Sometime during his career as a haulage company boss he crossed swords with Frank Tate, who owned Home Farm from 1989 to 1997. Tom also knew Morris Blakey, a local councillor. Tom always wanted to return to his birthplace and wanted to buy Home Farm. In 2004 he decided to return to the village, then known as Emmerdale.

Tom King returned to Emmerdale in February 2004. He saw Marlon Dingle at Tricia's grave and then went to the B&B where he recognised Alan Turner from his NY Estates days. Tom the called round to Home Farm and wanted to buy it but Zoe Tate refused to sell it until Sadie King, Tom's daughter in law blackmailed her into it. To get some inside information on his key competitor, Tate Haulage, Tom sent his son Carl to get a job there and act as a spy. When Carl found out that Tate Haulage planned to bid for a valuable contract, Tom undercut them to win it, moving himself, his family and his haulage firm into Emmerdale.While Tom waited to buy Home Farm he bought Holdgate Farm, Pear Tree Cottage and Dale View.

In September 2005, Tom finally got ownership of Home Farm but Zoe left a leaving present. She tampered with the gas taps and the manor blew up.

During his time, Tom acquired no end of enemies in the village. In December 2006, Tom was ready to marry Rosemary Sinclair. Jimmy was sick of being treated as useless, Carl found that Tom had ruined his relationship with Chas and Matthew was worried about his inheritance now Tom was wed to Rosemary. On Christmas Day 2006, Tom was hit on the head with an ornament and then pushed out of an upstairs window at Home Farm. He fell onto the concrete below and had convulsions due to the sheer shock of the fall. He died of a broken neck, thus signaling an end to his reign of manor.

There were many suspects. Eventually Carl King admitted to it.

As of 2017, 10 years since Tom's death, Jimmy remains the last of the original King's in the village. Tom does occasionally get mentioned. 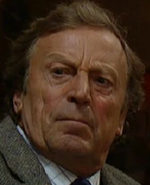 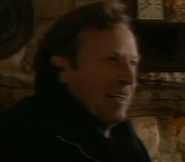 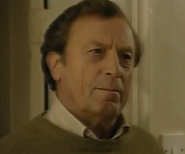 Tom is slapped by Edna Birch. 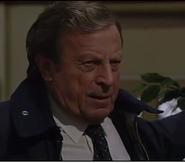 Tom meets a grisly end in December 2006 when he is pushed from a Home Farm window by Carl. 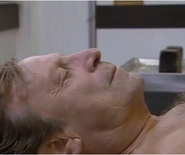 Tom is brown bread and lying in the mortuary. 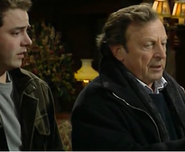 Tom in Mach 2005 with Max.
Community content is available under CC-BY-SA unless otherwise noted.
Advertisement