Emmerdale Past & Present Wiki
Register
Don't have an account?
Sign In
Advertisement
in: Buildings in Emmerdale., Emmerdale public houses., The Woolpack.,
and 2 more

The Woolpack is Emmerdale Village's main public house. It is the main meeting place for villagers and a stop for tourists visiting the Dales and a stop gap for the hikers and ramblers that pass through the village. The longest serving landlord of the Woolpack was Amos Brearly who ran the pub from 1948 to 1991 with his business partner Henry Wilks. The current building has only been in use since February 1976. Until then the Woolpack was at the other end of the village opposite a large green, which was vacated due to subsidence in early 1976. There is a separate page for The Old Woolpack.

Chas Dingle and Charity Dingle are the current landladies of The Woolpack.

ed to be a corn chandlers dwelling run by a Mr Mason. The chandlers closed down in the 1920s and the premises was empty and derelict for many years.

In January 1976, Mel Openshaw inspected the old premises as a potential new site to house The Woolpack after the then current pub had subsidence. Henry Wilks had considered the old chandlers as well.

After the old Woolpack was found to be suffering from subsidence in January 1976, Amos Brearly and Henry Wilks strongly considered surveyor Mel Openshaw's suggestion about using the former chandlers as the new Woolpack. Henry and Amos then bought the

current premises, and work begun on renovating the building straight away, and it became the new pub in February 1976. The new Woolpack building was at the other end of the village to the previous one. Amos was initially reluctant to move into the current building but Mr Wilks made him see

reason. At first Amos said he did not feel at home at the new premises, seeing as he loved the old one, which had more of a rural pub feel. But Jack Sugden said this new pub was better than the old one. Amos said he was taking to this place as well. Amos had now became accustomed to the new Woolpack and settled in, so he and Henry could happily keep being business partners in the new pub. In January 1977 Amos kept being awoken by a thumping sound which he described as "rupperty".

In 1978 they were held hostage by a young gunman, Steve Hawker and his girlfriend Pip Coulter. In 1980 Seth Armstrong decided to make the Woolpack his regular after deserting The Malt Shovel, Beckindale's other pub. He started what was to be many years of annoying and baiting Amos to the hilt.

Amos and Mr Wilks were on tap behind the bar for the entire 1980s. In July 1990 at Annie Sugden's birthday party Amos suffered a stroke. He later decided to call time as landlord. In January 1991 Amos retired to Spain. Alan Turner bought the Woolpack off Amos. Mr Wilks moved into Emmerdale Farm and carried on working at the pub. He was constantly irritated by Alan's modern ways of running the pub. Henry died suddenly in October 1991. Alan had a wine bar built at the back of the pub but it was destroyed in the 1993 plane crash. Alan married Shirley Foster in February 1994 but she was shot dead after being held hostage by Viv Windsor's crazed ex husband Reg Dawson. In early 1995, Alan took on managers Terry Woods and Britt Woods. When Amos came to the village again in June 1995, he was not pleased. He still dished out advice about his former pub.

Alan carried on as Woolpack landlord until 1999. He had to endure lots of bickering between his granddaughter Tricia Stokes and Mandy Dingle. Tricia and Mandy had a huge mud fight outside The Woolpack in February 1999. Turner was livid and told them they would get sacked if they did not get back inside now. Turner then had a heart attack and this made him decide he had enough of the pub.  He sold it to Diane Blackstock who became the landlady alongside daughter Bernice. Louise Appleton worked behind the bar and became the pub woner in 2002 when Bernice sold up and left Emmerdale. In 2004 the pub suffered structural

Rachel Breckle became a cleaner and Alicia Gallagher was a barmaid, all working under Diane and Chas. In 2016, Diane sold up and sold her half to Charity Dingle. She then moved out.

As of March 2017 Marlon Dingle is still employed as a chef at the pub, after 18 years.

In 1974 when cleaning out one of his cupboards, Amos was rifling through some old pictures, photos and documents and mentioned some of those belonged to his predecessor. The identity of Amos's predecessor has never been revealed to my knowledge.

"The new premises is just around the corner, not a 5 minute walk from this place". Mel Openshaw on the distance between the old Woolpack and the new Woolpack, which opened in 1976.

Pearl, Sandy, David and Alicia sat down in the seating area 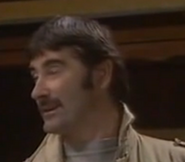 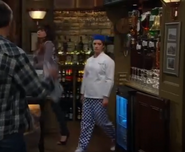 The Woolpack, a few days after the storm. January 2004. N.B. Can you spot Marlon and Diane?

The back doorway, March 1988. Turner and Sir Charles Douglas enter.

Front door of the Woolpack. November 1989. N.B. The (painted over) number of building.

Interior the pub on fire caused by fireworks.October 1998.

Front door of the Woolpack as the pub is on fire. October 1998.

Exterior of the Woolpack as the pub is on fire. October 1998.

A damaged Woolpack, day after the storm. January 2004.

Henry serves a customer in March 1988. 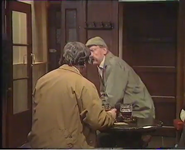 The Woolpack toilet doors in 1984.

The Woolpack front in 1999. Biff is contemplating his love life. 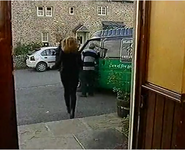 The front doorway of the Woolpack from inside. 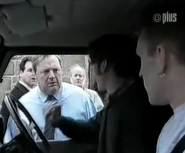 Amos, Turner, Terry, Biff and Dave in the Woolpack car park in 1995.

Tricia and Mandy have a huge mud fight outside The Woolpack in February 1999. 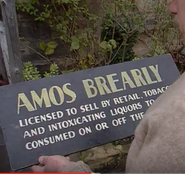 The end of an era as Alan Turner buys the pub from Amos. 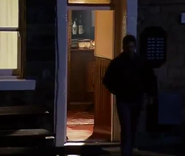 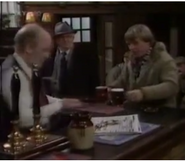 Amos serves Bill in The Woolpack in March 1988.

Pollard's car outside The Woolpack, May 1988. 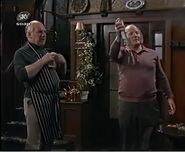 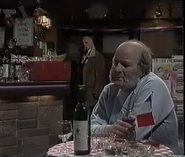 5 years on from being hit by burning plane wreckage, the Woolpack suffers another disaster in October 1998. 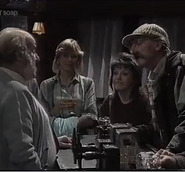 Inside The Woolpack in November 1986. 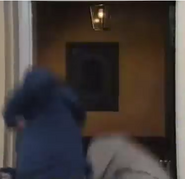 Roy Glover punches Scott Windsor in the Woolpack lobby in 1999. 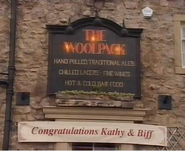 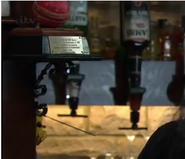 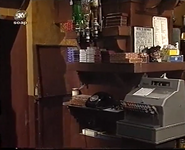 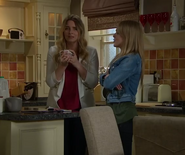 Charity and Vanessa in the Woolpack private room in 2018. 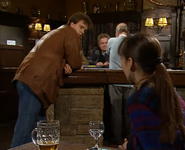 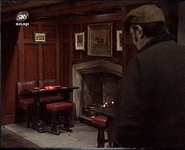 The Woolpack fireplace in 1983.

Henry, Amos and Rev Hinton in the back room in February 1986.
Community content is available under CC-BY-SA unless otherwise noted.
Advertisement