For some Emmerdale viewers not a lot of them know that the show has featured two Woolpacks in the shows long history. The old Woolpack (pictured right) was seen from the shows inception on the 16th October 1972 to February 1976 when Amos Brearly and Henry Wilks vacated it for a new premises at the other end of Beckindale. The reason for that was the old pub was found to be suffering from subsidence.

Scenes from the old Woolpack and the current Woolpack were seen in 3 or 4 of the same episodes in February, there was no join (no storyline where one episode finished in the old pub then the first scenes of the new pub were seen in the following episode). The buliding used for exterior scenes was the Falcon Inn, Arncliffe, North Yorkshire in Littondale in the Yorkshire Dales.

The old Woolpack was built in about 1776 along with most of the other cottages in Beckindale. Ephriam Monks was the brewery who owned the pub.

In about 1930, a Derby Eccles lived in a house behind the Woolpack, which collapsed.

In the 1940s Joe Hepple and his wife Molly Hepple were the landlord and landlady of the pub. At one time a Mr L Partridge was the landlord. In the 1950s, Amos Brearly a native of Bridlington moved to Beckindale and took over the running of The Woolpack. For years he lived alone in the pub and ran it by himself. Amos ran the pub throughout the 1960s by himself, and lived alone in the private quarters.

In 1970 to 1972, local farmer Jacob Sugden was drinking heavily. He was the leaseholder of Emmerdale Farm. Jacob drunk away all the farm's profits in The Woolpack. In October 1972, Jacob fell ill to alcohol related liver problems. On the 10th October 1972, Jacob died aged 56.

On a murky day in October 1972 Amos was surprised to see Jack Sugden who came into his pub after 8 years away. It was the day of the funeral of Jacob Sugden, Jack's father. Jack drank his pint then left the pub. In November 1972 Amos broke up a near fight Jack's brother Joe had with Tom Merrick when he saw Joe drinking with his wife. Amos was an eye for gossip and often landed himself in hot water over it. In January 1973 Amos entered for a brewery competition and the pub licensees had to be married so Amos proposed to Jacob Sugden's widow

Annie Sugden. She refused. Later on Amos was persuaded by Reverend Ruskin to employ Alison Gibbons at the Woolpack. She had a conviction for stealing but she was in dire straits and had learned her lesson. Amos took Alison on but kept at watchful eye on her. Alison later left Beckindale and then returned to run the village shop when Amy Postlethwaite retired. The Woolpack was refurbished in early 1973 and had a new interior with red wallpaper. Amos was becoming good pals with retired factory owner Henry Wilks who had shares in Emmerdale Farm and the village shop. In mid 1973 when Amos was

doing interviews for a new barmaid he was accompanied by Mr Wilks when conducting the interviews. After the interviews, Amos was reported to the brewery by Miss Drinkwater who Amos had interviewed and walked out when she found out that Amos was a bachelor. Shortly afterwards in October 1973, Henry Wilks half bought the pub with Amos. They started a business partnership and Mr Wilks moved in to the pub with Amos. In the spring of 1974 Amos almost had a marriage proposal when Ethel Ainsworth was interested in him. This never came about though. Traveller Dryden Hogben liked to srink at the old pub during his stay in the village. In August 1974, Wilf Padgett was arranged to install a new fireplace in the pub. Throughout the autumn of 1974 the pub had an overhaul

and a lot of the walls were cladded with stone and Amos had a mural fitted even though the pub was refurbished the previous year. This was because Amos and Mr Wilks also made the pub a hotel. They had rooms upstairs made into guest rooms.

1975 saw the Woolpack become a success with its hotel facility as well. In November 1975 Amos and Henry employed Winnie Purvis as a cleaner but she soon left. December 1975 saw Amos celebrate his last Christmas at that pub, although him and Henry were unaware of this, and unaware of the structural problems with the building lying ahead.

In early January 1976 scaffolding had to be erected at the front of the pub and a number of cracks were found in the walk in fireplace.

Amos and Henry were quite worried, especially Amos. The pub was found to be suffering from subsidence. Sam Pearson fuelled their worries by saying that a house behind the pub collapsed about 45 years ago. Henry suggested they move premises but Amos was against that idea. Mel Openshaw was the man who lead Amos and Henry in the move to new premises.

Amos and Henry soon came to the decision that they had to move premises. A derelict corn chandlers building round the corner was looked at and Mr Wilks and Amos paid their deposits on the new pub. In February 1976 Amos and Henry left the original pub. The last night in the old pub was marked with a party and free drinks. The next day, they collected a few more things and handed the keys to the estate agent, their last ever visit to the old pub. The old Woolpack closed its doors forever.

In March 1976 Amos and Henry talked about if the old Woolpack could be saved. If it could be saved it would be too late for them to move back after all the trouble they went to moving to new premises. Henry even suggested turning it into a restaurant. Someone made an offer to buy the old Woolpack in May 1976. Amos decide to sell it. It became a private house.

In 1990, Henry said the old Woolpack is not there any more. This does contradict 1976 references to the building being saved and turned into a private house.

The old Woolpack was mentioned a few times after it was vacated when Amos and Henry moved premises. However all these mentions were in past tense about the collapse of the pub, or mentions of their childhood in the village and remembering the old Woolpack.

In 1977 the old Woolpack was sold as a private house after the subsidence was fixed. This means Amos and Henry could have stayed there if they knew it could be fixed.

In 1978 Amos referred to the old pub when the boilerman suggested subsidence in the current pub. Amos did not want to go through the trouble of relocating yet again. Luckily this was not the case.

In 1979 Phil Fletcher said how he used to hang out round the back of the old Woolpack as a kid.

In 1990, Henry said the old Woolpack is not ther any more as it collapsed.

In 1993 Sarah Connolly mentioned the old Woolpack and how it had to be vacated years ago due to subsidence.

Its last known mention was in 1997 by Ned Glover and Becky Cairns when Ned mentioned the old pub and Amos.

The move of pubs in the show was bought on because in real life, Yorkshire TV decided that filming in Arncliffe, North Yorkshire was becoming a chore, due to transporting cast, crew and filming equipment to Arncliffe for filming, and having to put the cast and crew up in The Falcon Inn, which dubbed as "The Woolpack". They wanted to find a village closer to the Yorkshire Television Studios, Leeds as Arncliffe was a long way away. So Esholt, West Yorkshire, just north of Bradford, West Yorkshire was chosen. As Esholt's pub "The Commercial Inn" looked a lot different to the Falcon Inn in Arncliffe, as did Esholt itself, the writers wrote a storyline where the old Woolpack suffered with subsidence and Amos and Henry moved to new premises in another part of the village. 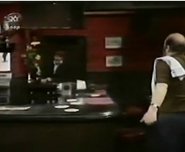 The fireplace collapses in 1974 during building works.

Christmas 1975. Their last Xmas in the original pub before the move 2 months later.

The side of the old Woolpack.

Amos and Mr Wilks say a final goodbye to the old Woolpack in February 1976. 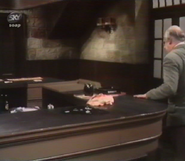 The bar of the Old Woolpack in 1974. Amos and Henry opening up.