Emmerdale Past & Present Wiki
Register
Don't have an account?
Sign In
Advertisement
in: Emmerdale characters., Past characters., Characters first seen in 1978.,
and 16 more

The character was only seen occasionally on-screen from 1978-1980.

In the summer of 1980, Seth switched his drinking loyalties from The Malt Shovel to The Woolpack, and became a full-time, permanent Emmerdale Farm character.

Seth was a loveable rogue and was a big wind up merchant often winding up Woolpack landlord Amos Brearly and later his boss Alan Turner. Turner used to say "Get Out Seth" whenever bothersome Seth used to find reasons and excuses to skive off work. After Sam Pearson died in 1984 Seth seemed to take on the role of Sam of upholder of country folklore, just the folklore of his generation. Seth was reunited with his old wartime girlfriend Betty Eagleton in 1994 and they moved in together. Seth went to live in Australia in 2003 and never returned to Emmerdale although he was on his way back when he died of a heart attack on the plane coming home in October 2005 aged 78. He was played by Stan Richards.

Archibald Seth Armstrong was born on the 12th November 1926 in Beckindale. He was supposedly illegitimate and was born to Miss Armstrong. Seth's birth was never registered so he never had a birth certificate. He knew the month and day of his birthday and was certain that 1926 was his year of birth. He was one of two children and had a sister, they at least were half siblings, if they did not necessarily have the same father. Seth was quite ill as a child and missed out on a lot of schooling but got better as he reached his teens. Seth romanced Betty Pendegast in 1944 and they almost married. During their romance, they even etched their initials into a tree in woodland near the village. Betty later moved to London. Seth later married Meg in 1952 and they had two children Jimmy Armstrong born 1953 and Freddy Armstrong born 1964ish. Seth was a regular customer at Beckindale's other pub The Malt Shovel. He was the school caretaker for many years. In about 1957, when Jim Latimer was a young lad, Seth used to take him poaching down to a remote farmhouse in the village.

Tom Merrick always knew Seth as a Malt Shovel man before Tom moved away to Leeds in 1972.

Seth was still the school caretaker in May 1978. Seth was taught to read and write by new Beckindale

schoolteacher Mr Moeketski. When the village school closed due to lack of pupils, who were transferred to Hotten, Seth Armstrong later got a job as a gamekeeper at Home Farm. Seth deserted the Malt Shovel in the summer of 1980 for The Woolpack. Tom Merrick returned to Beckindale in December 1980, after 8 years away and when he walked into The Woolpack, he saw Seth and called Seth a "snob" for swapping the Malt Shovel for the Woolpack. This began many years of Seth winding landlord Amos Brearly up to the hilt. Seth started a great friendship with young Jackie Merrick. In 1981 Seth forced local bad boy Tom Merrick, Jackie's "father" who was split up from Jackie's mother Pat, out of Hotten after he knew about Tom trying to frame Jack Sugden in an arson attack. He told him to leave Hotten with threats of disclosure if he did not go. Tom left the area. Tom Merrick returned in January 1982 and the truth was discovered that Jack Sugden was Jackie's father and not Tom. Seth Armstrong was a great comfort to Jackie as he himself never knew for sure who his father was. In March 1982, Seth had a new boss at Home Farm, Alan Turner.

Seth later started to annoy his boss Alan Turner at Home Farm where he worked as a gamekeeper. Seth was bone idle, and often concocted lies to get out of working. He was often caught drinking at The Woolpack when he was menat to be working. In 1983 it was revealed that Seth was in fact his middle name and his full name was Archibald Seth Armstrong. Jackie Merrick had seen a list of NY Estates employees and noticed an A.S Armstrong on the list. Seth bashfully said his first name.

In 1986, Seth kept tampering with Turner's scales. He was later beaten up by badger baiters later that year. In November 1987, a birthday party was held for Seth and he said his birth was never registered so was unsure of his exact date of birth. He said "Inbetween the first world war and second world war". In February 1988, a often lazy Seth was worried when Alan Turner and Joe Sugden bought Home Farm. Turner said they are all in the muck together now. However Denis Rigg bought Turner and Joe out by swindling them.

In August 1989 Seth and Jackie Merrick went into the woods to find a fox that was bothering the village. Jackie found it but he accidentally shot himself in the process. Seth said it should have happened to him instead of Jackie, and was devastated as he saw Jackie as a son. He was later found to be a possible illegal descendant of the Verney family who were Beckindale aristocrats from 1588 to 1978 and lived at Home Farm. But any possible claims to ownership were scuppered by NY Estates

purchase and later when Frank Tate had bought Home Farm 2 years previously. Also it turned out Seth knew all along he was not related to the Verney's at all.

In February 1993, Seth's wife of 40 years, Meg died. Further tragedy struck when in December 1993 a plane crashed on the village destroying Seth's home at Demdyke Row. Seth was presumed dead by Alan Turner, who had thrown him out of The Woolpack just before the crash but was overcome with relief when he saw Seth with Samson the horse. Seth was soon reunited with old flame Betty Eagleton in 1994, 40 years after she initially left the village. They planned to marry in December 1994 but decided to just remain a couple. The following year they moved in together at Keepers Cottage.

Seth was good friends with Kim Tate and gave her away when she married Steve Marchant in 1998. As Kim had made many enemies, only Seth saw her softer side. Seth went to visit his sister in Worthing the same year. He returned in November 1998 to find the Woolpack had been damaged in a fire. He was chosen to host the reopening after the pub was redecorated and got his own seat in the pub.

2000 was an eventful year for the ageing loveable rogue. In March that year he was involved in a bus crash but managed to escape with just a few bruises and cuts. Several months later he was mugged by two teenage girls and become agraphobic. In November 2000 the villagers threw a party for Seth for his 75th birthday although he was really only 74, but he decided not to tell them.

In 2002 Seth got a computer and Robert Sugden set up a webcam for him. This was set up in the lounge at Keepers Cottage and Seth used it to show the village Betty's daily routine. When Edna Birch told Betty she was heartbroken. She told Seth via the webcam that she was leaving him. However when he apologised they later reunited.

As Seth aged he became weaker and more tired. In December 2002 Betty went to visit Kathy Brookman in Australia, who had just had a baby. She returned in March 2003. Seth was worried that she'd move to Australia permanently but she assured him that she'd never leave Emmerdale.

In September 2003 Seth went on an extended holiday himself to Australia and never returned to Emmerdale. He later had a flight booked for Betty at Christmas to go and see him. In December 2004, the following year he appeared on a webcam, as seen on a laptop in the Woolpack. All the villagers watched as he gave the webcam speech.

Seth died aged 78 on the plane flying home to Britain from Australia on the 30th October 2005. Kathy Brookman returned for the funeral and told Betty that Seth had been ill for a while and knew he was going to die and had wanted to return home to do so.

A wake was held in his honour in The Woolpack. His funeral was conducted shortly afterwards on the 4th November 2005, but his body in the coffin was later smuggled to the woods and buried there illegally. A replica coffin was placed in the cemetery grave and no one apart from Betty, Laurel Thomas, Zak Dingle and Sam Dingle knew the truth. In July 2010 Betty was concerned that Seth's body had been discovered when an unrelated body Mark Wylde was discovered. She confessed all to Alan Turner. He promised to keep it a secret.

Seth Armstrong would never ever be forgotten. In 2009, Seth was compared to Jack Sugden as both being countrymen through and through. As he was buried in the woodland, word spread round that he was buried there. In 2013, Megan Macey said she heard about an old poacher being buried in the woods. That year, Sean Spencer found Seth's hide. But the hapless Sean accidentally burned the hut down. Sandy Thomas, who had never met Seth, had heard of him and referred to it as "The late Seth Armstrong's hide".

In May 2015, Betty decided to emigrate to Australia.

Seth Armstrong is a distant cousin of the Sugden family.

Seth's age and date of birth[]

In 1978, Seth mentioned his dad who grew an allotment in 1923 yet in 1981 he says his mother was an unmarried woman and Seth never knew who his father was. Unless he was making it up to make Jackie Merrick feel better about Tom Merrick not being his blood father.

In 1983, Jackie Merrick noticed A.S. Armstrong on the NY estates employees list. He asked Seth what does the A stand for and Seth said Archibald. He always used his middle name as his common name. In 1991 Seth pretended he was a relative of the Verney family and said his name was now "Seth Archibald Armstrong Verney"

"You're reet (right) there Mr Turner"

"George Michael, is he the little guy who works for water board", in answer to Nick and Archie talking about the singer and Wham.

Amos and Henry and several bird watchers stand out for hours hoping to see a Siberian Thrush. Seth "All this fuss over a Russian bird who cannot tell the difference between Beckindale and Moscow. Anyone would think he is carrying nuclear bombs".

"Do you want me to take bull to heffers Mr Turner?" "Cant Bill go" adds Alan Turner, "Oh no Mr Turner, got to be bull". Turner sighs but caroline laughs. 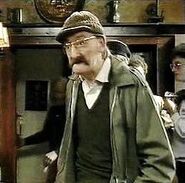 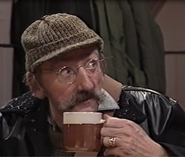 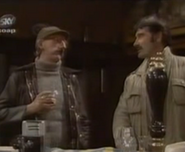 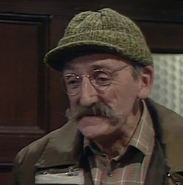 Seth arrives at Jackie and Kathy's wedding on a bike in 1988. 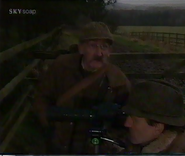 Seth chats to a bird watcher, but gets no response. 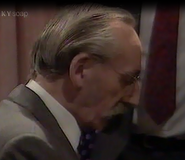 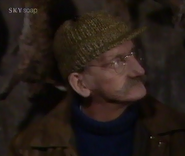 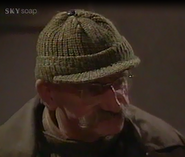 Seth finds his onions for the Master Gardeners Competition being eaten, April 1988. 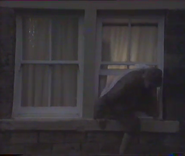 Seth climbs out of the Woolpack back window in 1984. 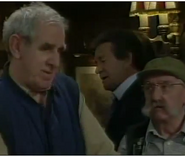 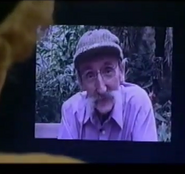 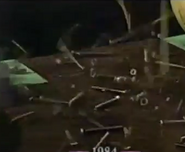 But the bottom falls out and screws, bolts and nails go everywhere. 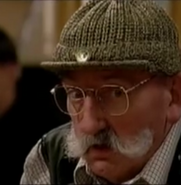 Seth with his mates Jock and Bill in March 1988. 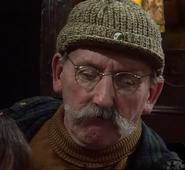 Seth in 1991.
Community content is available under CC-BY-SA unless otherwise noted.
Advertisement