As many of us Emmerdale fans know the village is filmed on a purpose built set on The Harewood Estate near Leeds, West Yorkshire and has done since January 1998.

It is a life size replica of Esholt, West Yorkshire, the village which had been used for the village scenes in Emmerdale Farm/Emmerdale for 22 years. It took almost 2 years of planning before construction began on the new village in June 1997. As early as 1989, the shows set designer Mike Long had visions of building a purpose built set but the tourism problem in Esholt was not bad enough to disrupt filming to a big degree.

Planning and construction of the Harewood Set[]

In December 1995 it was announced that Emmerdale was to introduce a 3rd weekly episode, starting at the start of 1997. This decision had come about in late 1995 when Mervyn Watson, the shows producer, announced the show was to do a 3rd weekly episode, like Coronation Street, EastEnders and Brookside had previously done. This meant more filming in Esholt. Filming in Esholt was quite disruptive to the villagers as it was with 2 episodes, so 3 episodes worth of "village" scenes would make filming worse. The crew was always asking Esholt residents to park down the road during filming, not to walk into shots etc.

In late 1995, at the same time, Tim Fee and Mike Long, the set designer, submitted plans for a purpose built set, a replica of Esholt, a "set" that was away from the tourists and that would not invade the privacy of the villagers of Esholt anymore. Costs were formalised in 1996. Mike was told by producer Mervyn Watson to make the new set look more like a Dales village in terms of stonework and such but was told to keep the shape, size and geography of the shop, the Woolpack, Pear Tree, Keepers and Victoria Cottages the same as Esholt.

A site was chosen which was a huge cornfield on the Harewood Estate near Leeds, which conveniently was the field near the two farmhouses that were used for filming exterior scenes of the Dingles farm and Glovers farm.

They had free reign with pretty much everywhere else outside Main Street. They copied the entire row of 4 houses next to the pub and the 4 running along from the adjoined post office. They were the same as Esholt and the cottage behind the shop which is at an angle fronting the corner of Main Street and the main road.

They copied the shape of the buildings used as the tea rooms, smithy, Annies Cottage and the village hall but placed them differently to Esholt. Church Lane in the new village was to be where the second row of houses along from the one adjoined to the shop was to be. Due to costs the church and vicarage was not recreated.

Construction began in June 1997 and was finished by December. The production team went off for Christmas feeling really proud of their achievement.

In December 1997, after 22 years of filming there, the cast and crew bade farewell to Esholt as the curtain came down on the village being used for the village scenes in favour for the replica village on the Harewood Estate. Esholt residents could finally get peace and quiet from film crews, but to this day have to put up with tourists from around the world flocking on the village to see the famous locations used in Emmerdale Farm/Emmerdale.

Filming begun on the new Harewood set in January 1998. Actor Clive Hornby who played Jack Sugden said he did prefer Esholt. The new set was much easier for the crew as there was a cafe on site for the cast and crew and they could really pan out to show the surrounding countryside.

First appearance of Harewood in Emmerdale[]

st episode to feature scenes filmed in the new set. This was Scott Windsor and Biff Fowler stood outside The Woolpack.

In many scenes set in the Emmerdale Village Cemetery a lot of the graves are of characters who died in the serial from 1972 onwards (plus Jacob Sugden, who died 6 days before the first episode airdate) but there are also many headstones of unfamiliar names, seemingly past residents of the village never seen or mentioned in the serial. When the purpose built set was being built, many headstones were transported from Woodgrange Park Cemetery in Manor Park, London after part of the cemetery was cleared to make way for new flats. The chairman on the borough council heard that a new set was being built for Emmerdale so offered for Yorkshire TV to come and collect several headstones for the "Fake" cemetery. Not a penny was exchanged, the headstones were offered free!

One name you may like to look out for is the headtsone of a Rosina Dorman, buried to the right in front of the grave of established character Rachel Hughes. The headstone says Rosina died in April 1934, and her husband William's name is on the above inscription. This headstone was seen in the episode where Liam Hammond's funeral took place in Episode 2614 (30th November 1999). Rosina is supposedly an ex Beckindale resident but in real life she would have lived in Leyton, London area, near the cemetery, as her headstone was one of the many bought up from the cemetery.

The back car park of the Woolpack 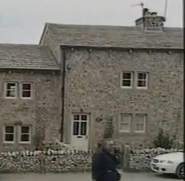 The London cemetery where headstones were used for the Harewood set, taken by me on a visit in August 2014

Another photo of headstones taken from Woodgrange Cemetery.

One of the graves from Woodgrage Cemetery in London, seen in a 1999 scene in Ememrdale to make the Harewood set cemetery look real, Rosina Dorman, died 18th April 1934.

Now some pics I took on the Emmerdale Tour. The entrance gate to the Harewood set, taken by me at the start of our tour.

A shot I took of the Woolpack looking to Pear Tree Cottage on the Harewood Tour.

Time for a pint? The tourists stop outside the Woolpack.

Back of Main Street Houses looking to the Woolpack.

Stopping off at the Dingles Garage. No grumpy Cain to tell us to do one.
Community content is available under CC-BY-SA unless otherwise noted.
Advertisement