Keepers Cottage, Main Street, Emmerdale, is a hosue in Main Street, Emmerdale and the former home of Betty Eagleton and Seth Armstrong. In 1995 when Biff Fowler bought it, Betty and Seth moved into it. It is owned by Victoria Barton and her husband Adam Barton but Betty rented it off her until she emigrated to Australia in 2015.

Lodgers over the years have been Alan Turner and Pearl Ladderbanks.

The cottage, along with most of the other buildings in Main Street was built in about 1700. In 1953, Norman Edgar and Joyce Edgar were living there followed by postmistress Mrs Ellis. The house was empty when Biff Fowler bought it in 1995. Up to then the residents of the house were not featured in the show.

Biff Fowler bought the cottage in 1995 and let Seth Armstrong and Betty Eagleton move in. Seth and Betty lived there

for many years. In 2000, Seth was mugged and became agoraphobic. In 2002 Seth went digital and set up a webcam.

In 2003, Seth went on an extended holiday to Australia and never returned to the village. He gave a Xmas message in 2004 via a webcam. Seth was due to return home to Emmerdale in October 2005 but died on the plane coming home from Australia.

Known residents over the years 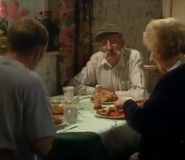 Seth, Betty and Biff in Keepers Cottage in 1995.

Seth and Betty inside Keepers in 1998.

Victoria Sugden in Keepers Cottage in 2012.

Vic and Adam in Keepers Cottage in 2015. 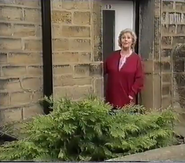 Betty outside Keepers in 1995. 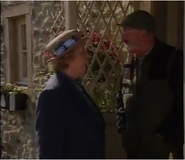 Seth and Betty outside Keepers in 1998.
Community content is available under CC-BY-SA unless otherwise noted.
Advertisement