Emmerdale Past & Present Wiki
Register
Don't have an account?
Sign In
Advertisement
in: Emmerdale characters., Past characters., Characters first seen in 1995.,
and 10 more

Joseph Mark Tate (alias Tom Waterhouse) was a character in Emmerdale who was born during the shows run in Episode 1980 (8th June 1995) however he made his first appearance in the following episode, Episode 1981 (13th June 1995). He is the son of Chris Tate and Rachel Hughes. He is the grandson of the late Frank Tate and his maternal gran was Kate Sugden, formerly Hughes. Joe's mum Rachel was killed in 1999 by her lover Graham Clark and Chris died in 2003 so Joe's aunty Zoe Tate took custody of him and they emigrated to New Zealand in 2005. Joe was to return to England in 2017, and back to Emmerdale. Joe has certainly become more twisted as he has got older as he is quite scheming and vindictive. Joe was originally played by Oliver Young and from Episode 7935 (13th September 2017) was played by Ned Porteous.

Rachel Hughes gave birth to Joe prematurely in June 1995 when she heard that her stepfather Joe Sugden had died. A year and a half earlier, Rachel's brother Mark Hughes died in the plane crash that rocked the village. So Rachel named her baby boy Joseph Mark Tate after Joe and Mark. Rachel was still not married to Chris at the time of Joe's birth but they wed that December. Rachel and Chris had a rocky marriage and he was a schemer so they split and she dated Graham Clark. Graham had killed his previous wife so when Rachel worked this out, he pushed her off the cliff on their day out walking in May 1999. Joe Tate was almost 4 years old so he was left in his dad's

care. Joe grew up having very few memories of his mother. In 2003, Chris died by killing himself, however he was dying of a brain tumour and wanted to set his scheming wife Charity Tate up for murder. Joe was 8 at the time.

Joe's aunty Zoe Tate took custody of him after Chris died in 2003. Zoe later became friends with Callum Rennie who was a good help to her, but they never entered a relationship. By 2005 Joe Tate was 10 years old. Zoe took her nephew Joe and her daughter Jean away from Emmerdale when they all emigrated to New Zealand in September 2005 to start a new life, well away from the Kings and the drama at Emmerdale.

Upon arrival in New Zealand, Joe went to school there and was bought up by his aunty Zoe. As Joe got older he became more independent but Zoe asked Graham Foster to keep an eye on him.

By 2017, Joe had made a lot of money as a young businessman and was back in England, now aged 22 and he wanted to get his own back on Charity for his father's death. Joe hid under the alias of Tom Waterhouse.

"Tom Waterhouse" became friendly with Debbie Dingle and they started a relationship. In November 2017, Debbie wanted a selfie of her and Tom on the sofa but Tom was quite annoyed and cagey for some reason. He seemed to not want to meet her mother Charity Dingle. It seemed this Tom knew much more about Emmerdale Village than Debbie thought. He was in on the scam to build a new golf course in the village, thus affecting the home of the Dingle family, and was trying to get to the Dingle family through Debbie.

Tom did say he was in love with Debbie. It turned out Tom was behind the new golf course in Emmerdale and had Morris Blakey helping him. Charity broken into his office once and found his passport and was shocked to see who he really was. He soon revealed his true identity as Joseph Tate. Charity said she had just found this out, as she had been suspicious of him, and that he was Chris Tate's son. Joe said he wanted to get back at them for Charity's part in the death of his father Chris Tate 14 years earlier. Joe said he set Debbie up with a home and a business to then snatch it away from her. He wanted to get to Charity though her daughter Debbie.

Noah Dingle said his father was a Tate. Charity later said that Chris was also Joe's father and Noah has an older half brother. Charity said that Chris was not a very nice man but Joe is even worse. Charity and Debbie retaliated by breaking into Jacobs Fold and weeing and defecating on the floor. Joe later dropped the charges, showing his good side. Charity and Debbie had to reluctantly say sorry, the fakest sorry ever.

Joe Tate held a party at Home Farm while at the same time he got dodgy demolition experts to demolish Wishing Well Cottage. Graham Foster thwarted the plan and rescued Sam and Noah. Debbie later tried to torch Home Farm but her father Cain saw the missing canisters and rushed there to stop Debbie. Joe was only 10 when he last saw Cain but can remember him. Cain said to Joe their little catch up will have to wait. Joe later bonded with Noah. He also formed a friendship with Ross Barton. But Ross is playing him, as he is siding with the Dingles.

Debbie got Simon McManus to plant drugs at Home Farm to ruin Joe but Graham Foster thwarted Simon's plan. Simon was then asked to attack Joe with acid. But dozy Simon got the wrong bloke. He attacked Ross Barton instead. Joe employed Jimmy King at Home Farm. Robert Sugden made a nasty remark about Joe's late mother Rachel Hughes, saying she was a slapper and had seduced his late father Jack Sugden. Joe vowed to get even with Robert. Joe knew about debbie's involvement in the acid attack on Ross, which was meant for Joe. Joe used this to blackmail her into getting back with him.

Joe Tate was set up by Jimmy. Joe had planned revenge on the King family for forcing his aunty Zoe out of Home Farm back in 2005. But Jimmy teamed up with Robert Sugden. Joe was conned out of money.

Joe and Debbie got back together. Graham Foster felt really bad on the anniversary of his wife's death and took his anger out on others. Joe mocked him by saying he must have been relieved when she and their baby died so he could be free. So Graham beat him up. Joe later made an apologetic Graham leave. Joe and Debbie got closer when Debbie's daughter Sarah was awaiting a heart transplant. Joe took on Priya Sharma as an employee at Home Farm.

In September 2018, Joe proposed to Debbie in front of Sarah. She rejected him as she thought it was an awkward moment. She later accepted his proposal. Cain, as usual warned Joe not to hurt his daughter. Joe forged her signature on a pre nuptial agreement and Graham Foster fell for Joe's lie about Debbie signing it.

During a row with Cain, Joe fell backwards and hit his head on a rock. He was unresponsive. So Graham took care of it and hid his body, although there is speculation that Joe survived and was just unconscious, and could still be alive.

In January 2019, Cain finally admitted to Debbie that he killed Joe. However, on March 2019, it was revealed that Joe was still alive and living in Monte Carlo.

"Have you been binge watching Midsomer Murders?" to Priya Sharma, who thinks Lachlan White is a killer. 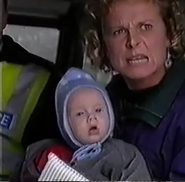 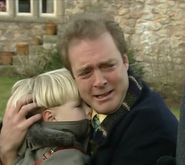 Chris is Joe in 2000, realising he is safe and not a victim of the bus crash. 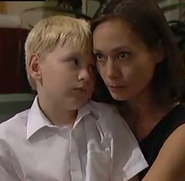 Joe leaves with his aunty Zoe, cousin Jean and Callum Rennie in 2005 for New Zealand. 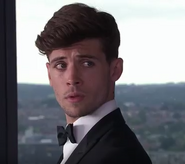 Now stinking rich, Joe returns to England in 2017, as Tom Waterhouse, plotting revenge on Charity for his dad's death. 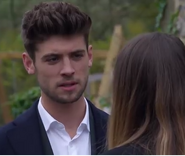