Emmerdale Past & Present Wiki
Register
Don't have an account?
Sign In
Advertisement
in: Emmerdale characters., Past characters., Characters first seen in 1972.,
and 15 more

Joseph "Joe" Sugden was a character in Emmerdale from its first episode in Episode 1 (16th October 1972) to Episode 1894 (11th August 1994). He was killed off offscreen in a car crash in Episode 1979 (6th June 1995). Joe was the younger brother of Jack Sugden and the son of Jacob Sugden and Annie Sugden. During his time in Emmerdale he was involved in romances, tragedies and endless wars with older brother Jack. He was also business partners with Alan Turner at Home Farm. Joe was played by Frazer Hines.

Joseph Sugden was born on the 31st May 1949 at Emmerdale Farm, the 3rd and last child of Jacob Sugden and Annie Sugden. He was named after his paternal grandfather Joseph Sugden. In about 1962 when Joe was 12 or 13 he fell out of a tree and broke his toe. Jack his elder brother took him to see the village Doctor. In 1964 Jack left home and young Joe soon left school and began helping out on the family farm. Joe and his brother in law Matt Skilbeck virtually ran the farm. In 1972 his father Jacob wrote out his will leaving the farm to eldest son Jack. Joe was disappointed as Jack was last seen in 1964 and Joe felt she should have got a share since he worked on the farm doing many jobs Jack should have done. In October 1972 Jacob Sugden died of pneumonia.

In 1972, Joe Sugden felt that since Jack returned to claim his inheritance that him and Matt actually ran the farm while Jack swanned off around London. In October 1973, Jack decided to leave Beckindale once again. In late 1973, Joe started dating Christine Sharp from The Milk Marketing Board. They married in September that year but Christine was too ambitious and they both decided they were not right for one another.

Joe returned briefly in November 1984 for the funeral of his grandfather Sam Pearson before returning to France.

In January 1988, NY Estates pulled out of Home Farm as they wanted to invest more overseas. Alan and Joe put in a bid for Home Farm and took out a loan. In February 1988 they won a bid at auction and became the owners of Home Farm. Joe and Turner earned £100'000 by felling some trees on the estate. But they struggled as Alan got drunk and was arrested, and lost the business an inportant client. In August that year, Denis Rigg did some secret spying and even made an offer to Joe and Alan, as he planned to con them. Joe met Kate Hughes that month and they started dating. They married in April 1989 and Joe became the stepfather of Kate's children Mark Hughes and Rachel Hughes.

In December 1993, Joe was driving Annie and Leonard to the airport on the night of the Beckindale Plane crash when a wing piece of the plane made Joe swerve and run into the ditch. Leonard was killed but Joe and Annie survived.

In August 1994, Joe Sugden met up with old friends Ned Glover and his family. Joe was almost run over by Ben Dingle at a party. Joe also knew Ben's father Zak Dingle. Ben died after a fight with Luke. Joe then decided to emigrate to Spain to join his mother Annie. He bade a goodbye to Jack.

In Episode 1979 (6th June 1995), Joe was killed offscreen in a car crash in Spain. Rachel Hughes went into labour and named her baby son Joseph Mark Tate after Joe Sugden and her late brother Mark Hughes. Joe's body was flown back to England and he was buried in Emmerdale Village Cemetery. His first wife Christine sent flowers. The Dingle family attended, more interested in the food at the wake though. It was never 100% established that Joe's death was an accident.

In February 2009 Annie said "I just buried the last of my children" when Jack died. This referred to Joe and Peggy.

Joe Tate moved back to Emmerdale in 2017. He is of course named after Joe Sugden.

Joe thumps the Land Rover in temper after a row with his OH in Feb 1988. 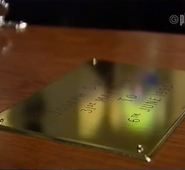