Emmerdale Past & Present Wiki
Register
Don't have an account?
Sign In
Advertisement
in: Emmerdale characters., Current characters., Characters first seen in 2000.,
and 8 more

Faith Dingle is a character in Emmerdale, first appearing as recurring character in 2000 and 2004 and portrayed by Gillian Jephcott. She returned as a regular character in February 2017, now portrayed by Sally Dexter. Her first appearance was Episode 2798 (30th November 2000). She is the mother of Cain Dingle and Chastity Dingle and the former wife of Shadrach Dingle. She had an affair once with Shadrach's brother Zak in which Zak was Cain's father.

Fleur Keith played a younger Faith in a flashback scene in 2017, set around 1988. Brigitte Coles played Faith in one brief scene in March 2017 where Faith revealed her mastectomy scars.

Born in about 1957. In 1973 as a very young woman, Faith met Shadrach Dingle and they married. However on the 14th February 1974, 16 year old Faith had a night of passion with her brother in law Zak Dingle and 9 months later, Faith gave birth to Cain. For years she let Shadrach think he was the father. In 1977, a girl, Chastity Dingle was born. The family lived in a run down area of Leeds, West Yorkshire. Shadrach was always drunk and violent to Faith. Faith thought she was the reason why so in about 1988, when Cain was 14 and Chas was 11, Faith walked out on them after she was given another beating from Shadrach. She thought it would make her children safer but Shadrach took it out on Cain.

Faith turned up in Emmerdale Village in November 2000. She left but again turned up in October 2004 for a Dingle shindig. This was her last visit to the village for the next 12 years. She had blonde hair at the time, suggesting she dyed it blonde or it was her natural colour as in 1988 and 2017 she had black hair. In February 2017, Faith slept rough in the barn at her brother in law Zak's house and was looked after by her great granddaughter Sarah Sugden Jnr. She soon let her presence be known to her children and grandchildren such as Aaron. She started to cross swords with Emma Barton. Faith got hold of the late Edna Birch's diary. She then claimed she could contact the dead. Faith then overheard Emma confessing to God that she pushed her husband James Barton off a bridge. Faith actually did not hear the full story

and assumed James had jumped. Emma breathed a huge sigh of relief. Chas has still not forgiven her mother Faith for the way she bought her up and abandoned her. Chas opened her heart to her mother, moaning to her. They were about to hug but Faith pulled away. Chas was angry but later on Faith looked at her chest where she had had a double mastectomy. Faith tried to explain to Chas but Chas kept butting in with smart remarks, so much so that Faith told Moira Dingle and Moira told Chas. Chas softened towards her mother, also knowing that Faith donated to her great granddaughter's cancer treatment.

Faith started dating Rishi Sharma. She told him that she had had a double mastectomy. Rishi was initially put off by this. Faith begun dating Eric Pollard. In October 2017, Moira gave birth to a baby boy after not knowing she was pregnant. The father was indeed Cain Dingle, so Faith's grandson. Faith helped Moira look after baby Isaac. Moira left him alone in the hospital waiting room and a nurse phoned social services.

The relationship between Faith and Eric remained a will they, won't they type. In June 2018, Faith found out that her step grandson Matty Barton was now living as a man.

Faith taking to Chas with Cain watching, in the Woolpack. 2004.

Lisa has it out with Faith whilst Shadrach and other Dingles look on. 2004. 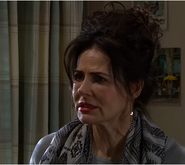 Faith in 2018.
Community content is available under CC-BY-SA unless otherwise noted.
Advertisement