Emmerdale Past & Present Wiki
Register
Don't have an account?
Sign In
Advertisement
in: Emmerdale characters., Past characters., Characters first seen in 1988.,
and 11 more

Denis Rigg was a character in Emmerdale Farm from Episode 1275 (24th August 1988) to Episode 1366 (6th July 1989). He became the manager of Home Farm several months after NY Estates pulled out and he cheated the then owners Alan Turner and Joe Sugden into selling their shares of Home Farm at a low price. Denis was ruthless and reckless, threatening villagers with evicition from their homes if they did not comply with him. He was played by Dr Who actor Richard Franklin.

Denis Rigg was born in about 1940. He wed Angela and they had two children, Benjamin and Jane. Denis became a businessman and quite a successful businessman. By 1988 he had made a lot of money.

Wealthy businessman Denis swanned into Beckindale in August 1988. He ha

d lunch with Joe Sugden and then later on Alan Turner. Dennis had done some research into Home Farm before and wanted to meet them separately. Dennis said the same thing to both, to buy the other one out. Neither Joe or Alan were aware of this. He cheated Joe into selling his shares at a low price. Angry Alan Turner also did the same making Denis the new owner of Home Farm.

Denis planned to give the whole village an overhaul, by having half of it demolished to make way for a quarry. The villagers had yet another battle on their hands, 2 years after the proposed nuclear dump, which they won. Denis looked onto Emmerdale Farm to expand his empire. Annie Sugden refused, saying she wanted to live out her days on the farm. He then tried to win over Henry Wilks but being a former businessman himself Henry told him he knew his type. One time in July 1989 when trying to expand his empire, Denis had a row with Joe Sugden after he refused Denis's offer to buy the farm and make Joe rich. Denis was determined to get the land off Joe whatever it took. Joe was tending his prize bull and the angry Denis upset the bull and then the bull crushed Dennis against a wall. Denis died writhing in agony on the floor. His reign of terror in Beckindale was over. The village was saved.

At his funeral it was revealed that Denis had a wife, Angela, and 2 children Benjamin and Jane.

In July 1996, 7 years after Denis' death, he was mentioned by Robert Sugden when he said how his gran told him to get lost when he offered to make the quarry bigger by buying Emmerdale Farm.

Ironically, a previous Home Farm manager, Richard Anstey, was played by actor Carl Rigg. Maybe the Denis Rigg character was named after the actor who had previously played a Home Farm manager. 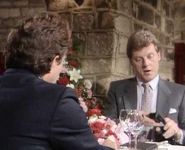 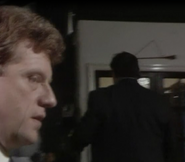 Denis tries to do the same to Turner and Turner refuses. 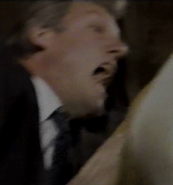 Denis is crushed by a bull. Ding dong the baddie is dead.
Community content is available under CC-BY-SA unless otherwise noted.
Advertisement