Emmerdale Past & Present Wiki
Register
Don't have an account?
Sign In
Advertisement
in: Emmerdale characters., Past characters., Characters first seen in 1989.,
and 17 more

Christopher Francis "Chris" Tate was a character in Emmerdale from Episode 1403 (14th November 1989) to Episode 3536 (17th September 2003). Originally a reasonable man from 1989 to 1993, he was paralysed from the waist down after the plane crash, which left him very bitter and Chris became one of the shows greatest bad boys. He decieved, cheated and swindled his way through life and often ended up with a fat lip even if he was disabled as he pushed people to the limit. He was the son of Frank Tate and brother of Zoe Tate. Chris found that he had an inoperable brain tumour in 2003 and vowed to get revenge on his scheming wife Charity by committing suicide and making it look like murder as he swapped the drink he poured with an identical one which had poison in it. He is the father of Joseph Tate. Chris still gets the odd mention nowadays and was a legendary character. Chris was played by Peter Amory.

Christopher Francis Tate was born on the 11 December 1963 in Yorkshire to Frank Tate and Jean Tate. Frank chose his first name as Chris' middle name. Frank had had a relationship a few years earlier and walked out on the woman, who was pregnant. This son was Liam Hammond. Frank and Jean had a daughter Zoe Tate in 1968. Frank was a rich man due to his successful haulage company and Chris and Zoe lived the life of luxury while Frank's secret son Liam Hammond grew up in poverty. Chris worked for his father once he left school.

Tate clashed with Emmerdale Farm resident Matt Skilbeck at Hotten Cattle Market over some sheep. Matt disapproved of his treatment of the lorry load of sheep. Chris's father Frank had just bought Home Farm in the same village that Matt lived in, Beckindale. At first, Matt did not know Chris was Frank's son and asked Frank to sack Chris, until Frank said Chris is his son. Chris later attacked George Starkey when Starkey found out that Frank had helped his wife die in 1984 and had sprayed "LadyKiller" graffiti on one of the Tate Haulage lorries.

Chris married girlfriend Kathy in November 1991. In 1993, she had an affair with Josh Lewis, a wine salesman. In December 1993 they planned to run off together.

1993-2003: Adapting to life in a wheelchair, bitterness and death by wine drinking[]

On the night of the 30th December, Kathy left Chris a note at Mill Cottage. Chris was on his way to The Woolpack but a plane crashed on the village, and wreckage hit the pub and Chris was trapped under the rubble. He was later found crying for help by Josh Lewis and taken to hospital. Chris was told he would never walk again.

Kathy stayed with Chris due to his paralysis from the waist down, but they split up and divorced after he had an affair with Rachel Hughes, getting her pregnant in the autumn of 1994. She gave birth to their son, Joseph in June 1995 and married Chris in December that year. Due to not being able to walk again, Chris became quite a bitter and resentful man. He even tried it on with Linda Fowler. Her father Ned Glover held Chris at gunpoint. In May 1997, Chris' father Frank died of a heart attack.

In 1999, Chris became friends with employee Liam Hammond. Chris did not know that Liam was his half brother. In September 1999, Chris suddenly disappeared and Zoe and Terry were worried about him. It turned out that Liam Hammond had kidnapped Chris, as Liam was the illegitimate son of Frank Tate. Chris was gobsmacked. Liam showed Chris photos of Frank with his mother and other documents, and Chris believed Liam. Frank had left Liam's mum and left them penniless yet made it rich himself. Liam felt bitter due to this. During a standoff, Zoe shot Liam dead by accident. Chris was rescued and sent to hospital.

Chris then began dating Charity Dingle. They married in 2001, despite the fact that Charity didn't love him. Chris wanted to adopt her daughter Debbie Jones, who had grown up in foster care as Charity was forced to give her up by her parents. Due to marrying Charity, Chris developed a rivalry with Charity's second cousin and first love, Cain Dingle, who was also Debbie's father. Cain was a volatile man who was a local crook. Before they married, Charity had an affair with Chris' sister Zoe. Although Chris forgave her, he wasn't as forgiving when he found out Charity was having an affair with her ex Cain and threw her out.

In August 2003, after having headaches, Chris has a biopsy and is told he has a fatal brain tumour. He then committed suicide, framing Charity for murder, although the truth was later revealed.

In 2017 a man named "Tom Waterhouse" did business with Debbie Dingle. He seduced her but then in January 2018 was revealed to be Chris' son Joseph Tate. Joe wanted revenge for Chris' death, blaming Charity for it. Joe bought Home Farm and moved into it in January 2018. He went into the main living room to confront the bad memories of where his father Chris died 14 years earlier. Joe later said how his father was a paraplegic.

Joe Tate has a photo of Chris one one of the tables at Home Farm near his exercise machines. 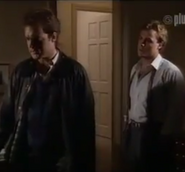 Chris in November 1993 with Josh Lewis. 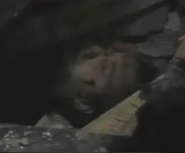 Chris is trapped under rubble of the Woolpack wine bar after the plane crash. 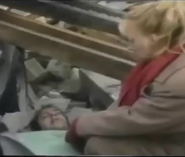 Chris is freed and awaits airlifting to hospital. 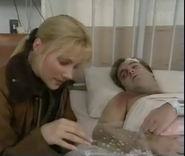 Chris in hospital after the plane crash. 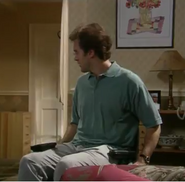 Chris has to spend the rest of his life in a wheelchair after his injuries in the plane crash. 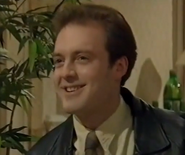 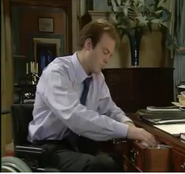 Chris is told he has a fatal brain tumour in 2003.

In 2003, an already dying Chris kills himself, but wants to frame Charity for his murder.
Community content is available under CC-BY-SA unless otherwise noted.
Advertisement