Emmerdale Past & Present Wiki
Register
Don't have an account?
Sign In
Advertisement
in: Emmerdale characters., Past characters., Characters first seen in 1994.,
and 14 more

Francis Albert "Butch" Dingle was a character in Emmerdale from Episode 1899 (30th August 1994) to Episode 2671 (24th March 2000) and was the eldest son of Zak and Nellie Dingle and the older brother of Ben Dingle, Nathan Dingle, Sam Dingle, Tina Dingle and half brother of Belle Dingle. Also he was the older half brother of Zak's secret son Cain Dingle  who was born in 1974 after Zak had an extra marital relationship with his sister in law Faith Dingle. Butch turned from a violent bad boy into a complete pillock when he got with Emily Wylie. Butch died after injuries sustained in the bus crash in 2000. Butch was played by Paul Loughran.

Francis Albert Dingle was born in 23rd August 1972 to Zak Dingle and Nellie Dingle. Butch was their eldest child. Butch grew up with his parents and younger siblings at Wishing Well Cottage. In true Dingle fashion, he became a local tearaway when he grew up and due to his stocky build was known as "Butch".

Butch arrived in August 1994 at a summer fair to confront Luke McAllister over the death of Ben Dingle. Even though Luke was proved innocent, Butch terrorised him, as did the rest of his family. Butch and his family refused to believe that Ben died of a heart defect. Butch threw stones at Luke in July 1995 after Tina jilted him at the altar. In August 1995, Luke was killed in a car crash and the Dingle vs McAllister feud ended. Butch caused an amount of trouble such as getting into fights and causing mayhem. Butch did start to mature as he got older. In December 1996 Butch lost his virginity to nanny Sophie Wright. She rejected him and he stalked her as he was unable to handle her rejection. Zak whacked Butch with a leather belt for it in July 1997.

Butch even later became obsessed with his cousin Mandy Dingle. Butch even clashed with Paddy Kirk over Mandy. Mandy even married Butch in November 1998 to gain £6,000 from Paddy's mother for not marrying Paddy. One time Butch even told Paddy to stay away or he would break his neck. He punched Paddy.

In March 2000, Butch got on a community bus with other villagers. At the same time, Pete Collins was driving a Tate Haulage truck whose brakes did not work. Pete lost control of the vehicle and crashed into the bus. Butch was rushed to hospital along with the other victims of the crash. Butch had severe injuries sustained in the crash. He had surgery but they could not repair the damage. Butch planned to take Emily to Whitby in the Summer. He asked the doctor, if the trip was paid for, and would she advise getting his money back? The answer waa yes - Butch cried. He did not want to die. Ashley Thomas, the local vicar said he would put in a good word for Butch to God. Butch and Emily married in the hospital on his deathbed. Butch then died with Emily by his side.

Butch was buried next to his brother, Ben, who died nearly six years earlier in August 1994. The epitaph on their tombstone is 'Dead but still Dingles'.

At the end of March 2000, Butch's cousins Cain Dingle and Charity Dingle turned up for the funeral and Cain wanted revenge for Butch's death. He terrorised Chris Tate as it was one of his lorries which crashed, killing Butch. Protesters who wanted justice for Butch and the three other victims of the crash were arrested for causing a disturbance.

In 2009, at Jack Sugden's funeral, Sam Dingle mentioned how they saw Butch off with a pint. In 2012, Zak had a nervous breakdown and Butch was referred to. In May 2012 Zak wandered alone on the moors and got a bit confused, he thought Luke McAllister killed Butch. Actually Luke did not kill anyone but was once accused of killing Ben.

A photo of Butch remains in the Dingle open plan living room/kitchen to this day.

In December 2017, Lisa Dingle mentioned the time Zak beat Butch with a belt for stalking a woman. This incident occurred over 20 years earlier in July 1997.

"Lovely. Battenberg" Final line, to new wife Emily on his deathbed in hospital after the bus crash. 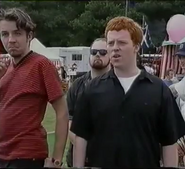 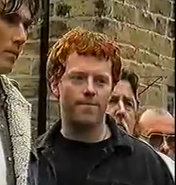 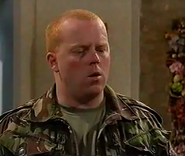 Butch dies in March 2000 after the bus crash.