Emmerdale Past & Present Wiki
Register
Don't have an account?
Sign In
Advertisement
in: Emmerdale characters., Past characters., Characters first seen in 1972.,
and 20 more

Annie Sugden (nee Pearson Later Kempinski and Brearly) was a fictional character in Emmerdale and on the the main characters in the show from its first ever episode on the 16th October 1972 to 1994. She returned for a few guest appearances in 1995, 1996 and 2009. The original matriarch of Emmerdale, Annie was a very tough woman, quite stern and strict at first but mellowed as she got older and became more cheery. On the 16th October 1972 she buried her husband of 27 years Jacob Sugden. Annie last appeared on the 10th February 2009, 36 years between her first and last appearance. Annie was played by Sheila Mercier.

Beckindale to young farm labourer Sam Pearson and Grace Pearson nee Armitage. Annie was their only child. Annie was a second cousin of Beryl who later wed Ronnie Crossthwaite. One of Annie's and Beryl's grandparents were siblings. Her first love was Lawrence Fishburne.

Annie later met Jacob Sugden and they married in March 1946 at St Mary's, Beckindale. They had 3 children, Jack in 1947, Peggy in 1948, and Joe in 1949. Annie's marriage to Jacob was turbulent. In about 1951 Annie almost had an affair with David Annersley. Annie's father forced David out of Beckindale. Her mum died in 1968 and Jacob spent his last years drinking away the farm profits in the local pub The Woolpack. He contracted liver failure in 1972 and died on the 10th October 1972 at Emmerdale Farm.

On the 16th October 1972 at Jacob Sugden's funeral, Annie's eldest son Jack returned to the village from London. He returned to claim his inheritance. Annie gave him a few choice words. Annie Sugden was the head of the household and let everyone know it as well. After her husband's death Henry Wilks, a retired Bradford factory owner bought shares in Emmerdale Farm and rubbed a few of the Sugdens up the wrong way. In 1973 she identified the watch owned by her second cousin Sharon Crossthwaite which was found by Trash, a local tramp.

Annie was shocked when Jack Sugden left Beckindale again in late 1973. In 1974 she befriended traveller Dryden Hogben who soon left the village. In 1975 her second cousins daughter Rosemary Kendall turned up in

In September 1978 an old friend of Annie's, David Annersley turned up in Beckindale. Sam Pearson, Annie's father had made David vow to never return to Beckindale in the 1950s when Annie was almost unfaithful to her husband Jacob with David. David soon left Beckindale. Annie later confronted an old mate of Henry Wilks, Major Vivian Denyer who falsely claimed that he was to buy shares in Emmerdale Farm. He soon left the village.

In 1979 Annie was quizzed by Cully Hotson about if she suspected who may have been the rapist of his daughter Wendy. The culprit was ran over by a motorbike and killed shortly afterwards. In 1980 Annie welcomed home her eldest son Jack who returned to Emmerdale Farm. Annie started suffering knee problems that year and reassured her father Sam who was angry that Joe Sugden wanted to go and work for NY Estates. Annie's doctor told her she would need an operation on her knee.

In January 1981 Annie went to hospital to have her knee operated on. She made a full recovery and returned to Emmerdale Farm.

In 1993 Annie along with Joe and new husband Leonard was injured when a plane crashed into the village. They were on their way to the airport when one of the wings of the plane hit the car sending it crashing. Annie went into a coma, Joe sustained injuries and Leonard died instantly.

June 1994 Annie Sugden took an extended holiday to Spain. She stayed with her son Joe. In December 1994 she said she would not be returning to Emmerdale. But in June 1995 Joe Sugden died in a car crash in Spain and that month Annie and Amos returned to Emmerdale for the funeral. Annie chatted with the Glover family and said she remembered their eldest child Dave Glover as a baby.

On the 6th July 1995, Annie proposed to Amos, over 22 years after he proposed to her in January 1973. On the 7th July 1995 they decided to dismiss the idea but when Annie mentioned that she had a chance to marry him years ago and felt it weird him asking her again Amos proposed to her and Annie accepted. Annie and Amos left Emmerdale and returned to Spain.

In November 1996 Annie returned to Emmerdale to ask Jack if he would sell the farm due to her financial crisis Jack refused. I am not sure how the storyline was resolved about her money situation.

Annie was mentioned many times but not seen in the village for the following 12 years and her next return was a sad occasion, to bury the last of her children, her eldest Jack Sugden in February 2009. Annie was driven to Butlers Farm by Rodney Blackstock and she told grandson Andy to hang onto the ailing farm as Jack would have wanted it. Annie returned to Spain after Jack's funeral.

She sent Diane a birthday card in 2010 and Andy and his girlfriend Alicia Gallagher stayed with Annie in 2011 when they considered moving to Spain. Annie referred them to a property seller but Andy and Alicia later decided not to move to Spain due to Andy's daughter Sarah being gravely ill.

In January 2014, Diane Sugden went to visit Annie at her Spanish villa with Debbie Dingle and Debbie's children by Andy, Sarah and Jack. In March 2016, the almost 96 year old Annie was unwell so Diane flew out to look after her.

Annie passed away on the 28th August 2020 at the age of 100. Victoria was told and was devastated. She then visited her father Jack's grave and was comforted by Marlon Dingle. Victoria said how you never picked a fight with Annie and got away with it. Annie's funeral took place in Spain but her ashes were bought back to Emmerdale. Her granddaughter Victoria said how she had moved to Spain for love, and she had outlived her 3 children.

"Drive slowly, I do not want Jacob bumped about on his last ride". First line to the undertakers

"I thought you would be mature enough to run this farm. Well are you" Final line to adoptive grandson Andy Sugden.

"Oh for goodness sake, will everybody stop looking like a wet week in harvest!" Annie to her family whilst waiting to go to Henry Wilks's funeral (episode 1599)

"Anyone would think I starved you lot" when Sam Pearson and Joe Sugden hurriedly help themselves to her freshly cooked cakes. (1978)

Annie was friends with Mary Nelson and Mrs Merrick, the mother of Tom Merrick. 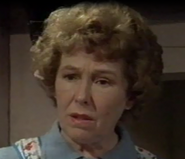 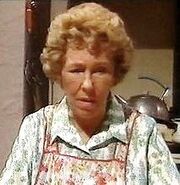 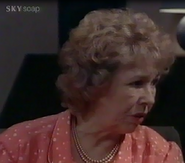 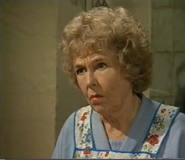 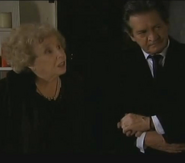