Emmerdale Past & Present Wiki
Register
Don't have an account?
Sign In
Advertisement
in: Emmerdale characters., Current characters., Characters first seen in 2003.,
and 12 more

Aaron Dingle (né Livesy) is a popular character in Emmerdale. He made his first appearance in Episode 3616 (24th December 2003) as a recurring character. After over a two year absence he returned in 2008 becoming part of the regular cast. Since then, Aaron has been part of some of the show's biggest storylines such as coming to terms with his sexuality; a suicide attempt; become involved in the assisted suicide of his quadriplegia boyfriend, Jackson Walsh; and self-harm.

Aaron was originally played by Danny Webb (2003; 2004; 2006) with Danny Miller taking over the role in 2008 until his initial departure in 2012, and returning in 2014. Upon his return, his storylines included become involved in a heist between Donna Windsor-Dingle and Ross Barton, clearing his name on the terms of arson, an affair with Robert Sugden, his subsequent role in Katie Sugden's death, his self-harming returning, revealing that he was repeatedly raped by his father Gordon Livesy when he was a child, reuniting with his estranged half-sister Liv Flaherty and rekindling his relationship with Robert.

Aaron Livesy was born on the 5th January 1992,  the son of young parents Gordon Livesy and Chas Dingle, niece of Zak Dingle. Chas was only 14 at the time she gave birth to Aaron. Chas and Gordon split and Aaron stayed with his dad, but Gordon raped Aaron when Aaron was naughty. Gordon remarried and had a daughter Liv with his second wife Sandra but he carry on raping Aaron. In the end, Aaron went to live with Chas.

Aaron turned up in Emmerdale Village, staying with his mother Chas Dingle in late 2003.

, Aaron returned to Emmerdale to live in the village permanently. He soon got into scrapes, stealing, vandalising and wreaking havoc. Everyone judged him harshly when a car started to roll down Main Street and crashed into Wylde's shop, and Aaron was trying to stop the vehicle. Aaron ran away when he was accused of crashing the car into the shop.

Aaron became good friends with Adam Barton and they formed a close bond. After a night out together, Aaron misread a situation and attempted to kiss Adam.

In March 2010, Aaron met Jackson Walsh. They became friends but then more developed between them. In October 2010, Jackson was severley injured in a train accident.

He later got into a relationship with Ed Roberts, a rugby player. On the 5th April 2012, Aaron left Emmerdale to start a new life in France with Ed Roberts.

Aaron Livesy returned in 14th August 2014 to help his mate Adam Barton out of trouble and to assist in the scheme Adam is involved in helping Donna Windsor-Dingle and Ross Barton bring down villain Gary North.

From December 2014, Aaron started an affair with engaged, and later married, Robert Sugden. In late 2015, Aaron's estranged father Gordon Livesy returned and this made Aaron turn to depression, as he had a resentment to Gordon. Aaron even was involved in a robbery with Ross Barton in which Aaron thumped a worker who challenged him. Aaron was suspected but never caught for the crime.

On January 2016, Aaron end up in hospital after collapse at the scrapyard with Robert witnessing the collapse. Robert took him the hospital where he is diagnosed with septicaemia as a result of his cut. Aaron told Robert his dad was the reason why he is starting self-harming again but refused to tell him the real reason. The next day, Aaron running away from the hospital and hide in Debbie's house before Robert finds him. Aaron broke down when reveals to Robert that his dad, Gordon raped him. Aaron explained to Robert the first time Gordon raped him that he was 8 after Chas left him. Aaron told Robert, Gordon raped him to punishing him. Aaron notes how Gordon threatened to do it again if he told anyone. Aaron explains that everything went back to normal when Gordon meet Sandra but when he was 10, Sandra walks out after had enough of Aaron getting into fight, Gordon raped him again as a way of getting him back in line. 2 years later, when Aaron was 12, Gordon raped him again following an argument with Sandra. 4 years later, Sandra caught Aaron stealing alcohol and Aaron punches Sandra. Gordon found out and kicked Aaron out.

On 3rd February 2016, after spending a day in the seaside, Aaron reveals to his mum, Chas that Gordon raped him. Aaron broke down when explaining to Chas; one night, Gordon return home in angry mood and forgot the fish and chips. Gordon made something else for Aaron to eat but he refused to eat it. Gordon shouting at Aaron and then send him to the bed. Hours later, Aaron was woken up by Gordon smashing something, he hide under the blanket and trying to get to sleep before Gordon open the door. Gordon walks and then climb into the bed with Aaron where he raped him. The next day, when coming home from school, Gordon apologizes to Aaron what he did but he had been naughty.

In October 2016, Aaron overheard Lachlan White threatens to lie Robert sexually abused him that resulting Aaron grabs Lachlan, dunks Lachlan's head in the water barrel and threaten him. Later, Aaron kidnapped Lachlan. As he was planning to marry Aaron, Robert discover Aaron's kidnapped on Lachlan. Robert and Aaron take Lachlan in the quarry where Lachlan escape and Aaron chase after him. Aaron and Lachlan fight in the edge of the quarry. Lachlan almost forcing Aaron over until Robert pulls him off. With Lachlan back in the boot, Aaron and Robert talk and Robert admits he is bisexual. While driving back to the village, Robert produces a ring and tells Aaron he was going to propose. Aaron takes his eyes off the road, but Robert yells at Aaron to watch out and he loses control of the car trying to avoid a pile up on the road. They crash into a water-filled quarry. Aaron regains consciousness and realises his leg is trapped. Robert attempts to free him, but Aaron begs Robert to save himself. Robert eventually manages to free him and he gets Aaron breathing again, as the paramedic arrives. Robert dives back into the water to try and save Lachlan who already escape. Aaron becomes unresponsive and undergoes surgery on his liver. He regains consciousness as Robert, Liv and Chas visit him where Aaron accepts Robert's proposal. 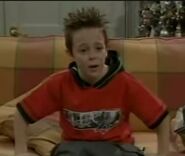 A young Aaron Livesy, as he appeared in his second episode. December 2003. 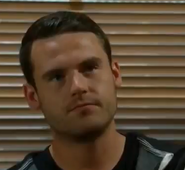 Publicity shot of Aaron Livesy with his mother, Chas Dingle in 2004. 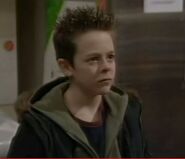 The builder and the mechanic. Jackson and Aaron. 2010.

Aaron telling Robert his father Gordon raped him when he was a child. January 2016

A young Aaron and baby Liv

A young Aaron and Liv

Community content is available under CC-BY-SA unless otherwise noted.
Advertisement